The Hills of Heroes: Vercingetorix

To stand in its embrace is to experience the soul of France. In its heart, the Chaine des Puys is a line of 80 dormant volcanoes that run along a north-south axis. The capital of Auvergne, Clermont-Ferrand, punctuates that line. I still remember the day I stood on a hill and imagined Vercingetorix traversing it.

Vercingetorix was the son of a Gallic chief, Celtillus, who was the leader of one of the strongest tribes in Gaul, the Averni. Vercingetorix (V for short) learned the ways of Roman warfare while fighting the Germanic tribes who began crossing the Rhine River. He later used that knowledge to rebel against Roman rule in 52 BCE. In uniting the Gauls and fighting for the freedom of all Celts, V exhibited charisma, leadership, and courage.

So goes the narrative of history. But history is about more than statistics and sound bites. It’s about human stories.

The fact is, Vercingetorix pissed off Caesar. Caesar recounted the rebellion in The Battle for Gaul and his words make it clear that the famous Gaul got under his skin. The adjectives he used were derogatory, but there is a touch of grudging admiration. Nonetheless, what V accomplished was extraordinary for his time. He almost thoroughly united a people who were unaccustomed to it. In fact, his own father had been executed by his tribe for trying to rule all of Gaul. That should have been enough of a deterrent, but V was committed to throwing off Roman rule. He almost succeeded. Throughout the campaign, V and his forces took a toll on those of Caesar’s and Caesar was initially stumped by V’s cavalry who could out-run and out-maneuver Caesar’s. In the end, Caesar enlisted German tribes as cavalry who were also known to be excellent horsemen. Ironically, it was in the fight to expel German tribes that V and his fellow countrymen learned the ways of Roman warfare.

In the end, it was too little and too late. To stem the tide of starvation, V surrendered to Caesar who kept him imprisoned for 6 years before having him strangled as was the custom of the day.

The lesson? The power of the individual during times of great disruption can never be underestimated. 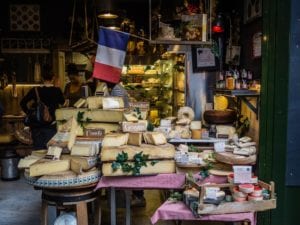 photo by darren coleshill on unsplash

The year I lived in France was a year I learned a great deal about being Celtic. When I returned, I finished up my college degree with a dissertation on The Role of Women in Celtic Society 1500 B.C. to 500 A.D. And eventually, I I got my Braque d’Auvergne (now on my second) who reminds me of the spirit of Vercingetorix and the Gauls who fought for their right to their homeland.

The shoes of Auvergne and the Battle for Gaul

For those who find Roman warfare interesting, The Battle for Gaul by Julius Caesar is a must read–just read between the lines. Propaganda is not new. And in a fascinating way, the story is incredibly similar to that of the invasion and conquest of America.