Reviewing the World of Sociopaths and Psychopaths

Snakes in Suits grew out of the authors “growing realization that the lack of specific knowledge about what constitutes psychopathic manipulation and deceit among businesspeople was the corporate con’s key to success.” Accordingly, the authors’ premise is “psychopaths do work in modern organizations; they often are successful by most standard measures of career success; and their destructive personality characteristics are invisible to most of the people with whom they interact.”

Should we care? When they flourish in today’s environment and profit by circumventing the rules of acceptable behavior, anyone who doesn’t loses by definition.

The authors begin Snakes in Suits with a story that runs throughout the book. “One could imagine he was arriving at a GQ photo shoot, judging by his smooth, strong, and confident entrance.” Throughout the story, Dave presents himself as the ideal of what corporate America seeks in a candidate and an employee. A man of apparent action and calm under fire.

Except it’s a façade and their fictional character, Dave, uses his skills to undermine the work of others to make himself look indispensable. Chances are you have worked for or witnessed someone like Dave in action. They know how to schmooze their way into promotions.

“Most workers are honest, loyal, law-abiding citizens, concerned with making a living, contributing to society, and raising a family in a fair and just world. Others, though, are more selfish, concerned only about themselves with little regard for fairness and equity.” (p. ix)

The authors believe there are several reasons why psychopaths are able to thrive in the corporate setting when their conning and bullying traits should actually lead to discipline or termination, but don’t. One, some core psychopathic personality traits may seem attractive to hiring managers and their charisma contributes to their success in the position. Two, some psychopathic traits can be interpreted as leadership traits. Taking charge, making decisions, and getting others to do what you want are features of leadership and management, but they can also be forms of coercion, domination, and manipulation. Three, the changing nature of business is a contributing factor to their success in hiring and retention. A psychopathic personality thrives in the new disruptive economy in which businesses offer opportunity in fast-paced, high-risk, high-profit environments.

The remainder of the book helps the reader identify the behavior and therefore the person and highlights ways in which people and organizations can protect themselves from the harm of psychopathic behaviors. 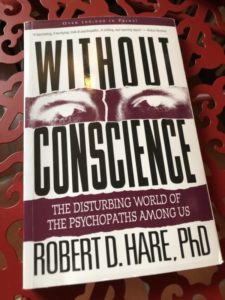 Without Conscience, published in the 90’s, is an older book, but it remains more relevant than ever. In fact, The Diagnostic and Statistical Manual of Mental Disorders (DSM-IV) has been updated, but the Antisocial Personality Disorder (APD), the preferred term for sociopaths and psychopaths, remains an issue.

The APD can often the don the uniforms of credibility and acceptance.

The fact is that the majority of psychopaths manage to ply their trade without murdering people. They hide in plain sight.

Dr. Hare attempts to identify an accurate means to identify psychopaths amongst us. “For, if we can’t spot them, we are doomed to be their victims, both as individuals and as a society.”

Without Conscience is insightful and very well written. It’s a must. Even if the conservative estimate of 1% psychopaths is true (I supect it’s much higher), that would mean 3.3 million walk amongst us. Chances are we have all met a few of them in our lifetimes. This book helps you identify them. While it is impossible to label someone as a sociopath or psychopath even after reading this book, it does give you some insight into certain behaviors that may allow you to navigate the risky terrain, ie. run like hell. If you are caught in a working relationship, it might also give you insight into how you can navigate the attempts to manipulate you and undermine you while you find a new job.

The aspect that is most startling to me and it’s necessary to understand from a neuroscience perspective, the psychopathic personality does not feel remorse. There is no conscience. They do not suffer from guilt. The normal anxieties of aligning with social mores and laws and worrying about consequences of your actions, are foreign and mystifying to them. All that matters is achieving personal desires even if that means hurting someone else.

One of the take aways from reading Snakes in Suits and Without Conscience is I am ill-equipped to deal with the psychopathic personality. It is not a term to be used lightly and it is not something I can diagnose, but I can protect myself if I discern something is not quite right. There is no reason to stick around to become a victim. The majority of humans feel at least some level of conscience. A psychopath does not. You cannot explain how you feel to a psychopath. It will have no meaning. You cannot explain to a psychopath that there are laws to protect people. A psychopath views a law as a trivial problem that does not apply to them. They know what they want and they will find a way to get it.

If a person cannot feel empathy, there is no possibility of understanding. It becomes wasted breath. These were 2 illuminating books.